Lyric Opera of Chicago and the Chicago Urban League announce EmpowerYouth! Igniting Creativity through the Arts 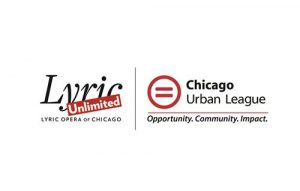 Chicago (9/26/2017) – Lyric Opera of Chicago and the Chicago Urban League are excited to announce EmpowerYouth! Igniting Creativity through the Arts, a groundbreaking, multiyear partnership. Collaboratively planned and administered by Lyric Unlimited, Lyric’s community engagement and education arm, and the Chicago Urban League’s Youth Development Center, EmpowerYouth! is a multidisciplinary afterschool program that will culminate in the presentation of a fully staged, youth-centric opera based on real-life experiences.

EmpowerYouth! spans two years beginning this fall and continuing through the summer of 2019. An administrative and creative team assembled by the two partner organizations will work with approximately 30 high-school students drawing primarily from four Chicago communities: Bronzeville, Englewood, West Englewood, and Roseland. The students selected to take part in EmpowerYouth! are current participants in the Urban League’s Project Ready – High School program, which focuses on helping students succeed by developing life skills and exposing participants to new career opportunities.

Using storytelling, music, drama, and dance, Empower Youth! will amplify the students’ life experiences through immersive arts programming, directly addressing the issues they face from their own perspectives. Participants will be exposed to careers and mentors in the arts, while sharing their stories about navigating life in Chicago. These stories will become the basis for the libretto of the new work, which will be presented as a culminating event of the program’s first year on May 31, 2018, in a public performance at the Lyric Opera House. More details will be announced at a later date. The second year of the program will engage a new batch of students who will receive mentorship from the first-year participants.

Beginning October 4, program participants will meet weekly after school at the League to begin the creation of their opera. They will work with prominent artists, writers, composers, and opera singers, and become familiar with basic performance skill sets to help them determine which area of the artistic process they would most like to pursue. EmpowerYouth! will include leadership development, weekly rehearsals led by professional teaching artists, and exposure to careers in the arts including marketing and promotion, wigs, makeup, wardrobe, lighting, stage management, and performance.

Participants will collaborate with teaching artists to share their individual stories as they begin to bring the various elements of a stage performance together, spearheaded by composer Damien Sneed and librettist Patricia Smith. They will receive training in the creation of musical elements and the development of theatrical scenes, and will come together for group rehearsals combining these various performance aspects.

EmpowerYouth! students will also work alongside local artists to gain new artistic skills leading up to their final performance. They include Tanji Harper, choreographer, teacher, and Artistic Director of The Happiness Club; Miguel “Kane One” Aguilar, visual artist, educator, and founder of Chicago’s Graffiti Institute; Melissa Foster, Senior Lecturer in Voice at Northwestern University and vocal coach for several Broadway shows in Chicago and nationally; and Chicago singer-songwriter, Daryn Alexus.

“What a wonderful opportunity for creative collaboration between our two organizations, all in support of the students it will serve,” said Anthony Freud, Lyric’s general director, president & CEO.  “And what exciting opportunities EmpowerYouth! will provide for the participating high-school students — through education, exposure, engagement, and experience. We greatly look forward to supporting their journey of discovery — of opera as a revelatory form of expression, and even more important, of themselves as creative individuals and collaborators with unlimited potential.”

“The League is ecstatic about the innovative artistic opportunities that will ensue as a result of our partnership with the Lyric Opera through EmpowerYouth!,” said Chicago Urban League President and CEO Shari Runner. “The prestige of Lyric Opera and its constituents will undoubtedly impact our Project Ready students in transformational ways, affecting both their professional and personal development. We are delighted about the multiyear project and look forward to witnessing their journey.”

Damien Sneed is a multi-genre recording artist who is widely admired for his range of musical talents and extraordinary achievements in his burgeoning career. A 2014 recipient of the prestigious Sphinx Medal of Excellence Award, which is presented annually to emerging Black and Latino leaders in classical music, Sneed has garnered attention in a wide range of musical genres, including gospel, jazz, pop, and R&B. A pianist, organist, conductor, composer, producer, arranger, vocal coach, and arts educator, Sneed has worked with jazz, classical, pop, and R&B legends such as Wynton Marsalis, Jessye Norman, Stevie Wonder, Diana Ross, Carlos Santana, and Ashford & Simpson. Sneed is an Artist-in-Residence at Nyack’s Christian College in New York City.

Patricia Smith is a poet, teacher, performance artist, and author. She’s written eight books of poetry including Incendiary Art; Shoulda Been Jimi Savannah, winner of the Lenore Marshall Prize from the Academy of American Poets; Blood Dazzler, a National Book Award finalist; and Gotta Go, Gotta Flow, a collaboration with award-winning Chicago photographer Michael Abramson. Her other books include the poetry volumes Teahouse of the Almighty, Close to Death, Big Towns Big Talk, Life According to Motown; the children’s book Janna and the Kings, and the history Africans in America, a companion book to the award-winning PBS series. Her work has appeared in Poetry, The Paris Review, The Baffler, the Washington Post, The New York Times, Tin House, and in Best American Poetry and Best American Essays. Smith has collaborated with the New Jersey Symphony Orchestra, Angel’s Pulse Dance Troupe, the Sage String Quartet, and singer Meshell Ndegeocello; her one-woman show “Life After Motown,” was produced by Nobel Prize winner Derek Walcott. Smith is a Guggenheim fellow, a National Endowment for the Arts grant recipient, a two-time winner of the Pushcart Prize, a former fellow at Civitella Ranieri, Yaddo and MacDowell, and a four-time individual champion of the National Poetry Slam, the most successful poet in the competition’s history. She is a professor at the College of Staten Island and in the MFA program at Sierra Nevada College, as well as an instructor for Cave Canem, the annual VONA residency, and in the Vermont College of Fine Arts Post-Graduate Writing Program.

Lyric Unlimited was launched with major catalyst funding from The Andrew W. Mellon Foundation and receives major support from the Caerus Foundation, Inc.

Lyric Unlimited is a long-term, evolving initiative that encompasses company activities that are not part of Lyric’s mainstage opera season. Its mission is to provide a relevant cultural service to communities throughout the Chicago area and to advance the development of opera by exploring how opera as an art form can resonate more powerfully with people of multiple backgrounds, ethnicities, and interests. It also leads the development of innovative partnerships with a wide range of cultural, community, and educational organizations to create a breadth of programming through which Chicagoans of all ages can connect with Lyric. In the 2016/17 season, more than 100,000 individuals participated in Lyric Unlimited programs.

Established in 1916, the Chicago Urban League is a civil rights organization that empowers and inspires individuals to reach and exceed their economic potential.  The Chicago Urban League supports and advocates for economic, educational and social progress for African-Americans through our agenda focused exclusively on economic empowerment as the key driver for social change. For more information, visit www.thechicagourbanleague.org.

Lyric Opera of Chicago’s mission is to express and promote the life-changing, transformational, revelatory power of great opera. Lyric exists to provide a broad, deep, and relevant cultural service to Chicago and the nation, and to advance the development of the art form

Founded in 1954, Lyric is dedicated to producing and performing consistently thrilling, entertaining, and thought-provoking opera with a balanced repertoire of core classics, lesser-known masterpieces, and new works; to creating an innovative and wide-ranging program of community engagement and educational activities; and to developing exceptional emerging operatic talent.

Chicago Defender – Not On Our Watch