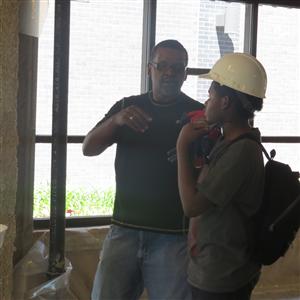 Despite a national economic recovery and a steady unemployment rate of 4.7 percent, people of color in most American cities, especially Chicago, continue to suffer from growing economic and social disparities. With an unemployment rate more than triple the national average, many African Americans in Chicago who live in neighborhoods that are impoverished with unfavorable social conditions often see no evident path to a better quality of life. Meanwhile, manufacturing jobs, once a prominent foundation for the middle class, are being heralded as the silver bullet solution that promises to save the middle class and serve as a lifeline to those in economic despair.  Let’s think about this for a second.

Advancements in technology are reducing the number of available jobs in the manufacturing industry overall, and it is unlikely that we will see 18 million jobs again. The sector has moved toward automation, robotics and advanced manufacturing, which requires a different skill set.

mHUB exists to ensure that Chicago and the manufacturing industry in America’s heartland continues to accelerate, grow and thrive.

“Labor intensive and low-skilled jobs have left the U.S. and are likely to not come back,” said Allen. “Some will be retained as this transition will occur over decades. Even if the production of goods returns, the jobs will be completed through more automation.”

The strengthening of the middle-class and the rejuvenation of Black communities can be realized when we apply a greater focus on STEM (Science, Technology, Engineering, and Mathematics) education in our schools as well as through job training, like many programs at the Chicago Urban League.

Although the manufacturing industry itself isn’t necessarily growing, the rapid job boon stems from baby boomers who are retiring.  Meanwhile, employers are having a hard time filling the gap left by this exodus.

According to Guarino, there are more job openings than manufacturers can fill – 353,000 per month on average in 2016.

STEM education is key in getting these jobs filled and sparking the rebound of the Black middle class.