The Chicago Urban League is proud to announce that it is once again hosting a student mission trip to China! For the next two weeks, 24 CUL students are being immersed in the Chinese culture, customs and cuisine. This journey is an adventure of a lifetime that is sure to change their lives. The great news is that we get to be a part of their journey through the blogs they are writing. Check out the first entry below:

CJ and Trotter checking in! We just woke up or should I say Ms. Parker woke us up. We needed to be down at the restaurant for breakfast by 7:15am, which came as a shocker to us because we had anticipated being down by 7:45am. We always make it happen so we followed as instructed as good ambassadors should. Walking down to the restaurant, eagerly awaiting our first Chinese breakfast, we were more excited than ever. We didn’t expect the food to be so similar to an American breakfast: bacon, eggs, milk and so on. The food was delicious!

After breakfast, we gathered up and went to the Beijing Language and Culture University’s Opening Ceremony. It was positive and interesting; the speakers discussed the relationship between China and the US which was awesome! Then one of the ambassadors, Justin came up and made a speech which was also super dope! After the opening ceremony, we went to a Lion/Dragon dance workshop and we had so much fun although we struggled to understand the instructor, this just shows how cool it is to communicate with people without words. We danced with and without the dragon heads and costumes and played the drums.
We connected with each other more through this experience. Next we went to the Great Wall of China, it was so colossal up close, and it was so cool! We had such a great experience and we were both exhausted after the fact. We ate dinner with our friends and had such a great time. This Student Mission Trip to China is looking brighter and brighter each day. That’s it for this time, it’s CJ and Trotter checking out! 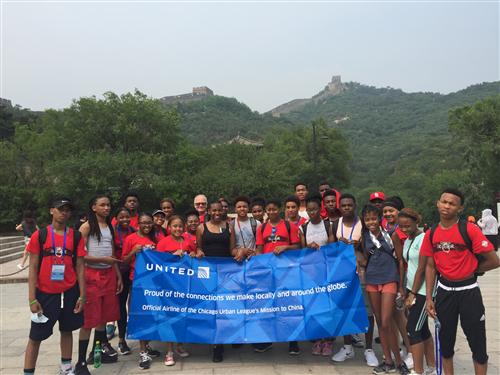